Not everyone can be a people manager. And that’s okay. – Weareluminate

Not everyone can be a people manager. And that’s okay.

Where do you see yourself in five years’ time?

It’s a question beloved by interviewers since the dawn of time. Its purpose is, presumably, to identify the level of ambition of the person on the other side of the desk and, perhaps, to gauge how committed that person is to a long-term future with the organisation.

But does this seemingly simple question also perpetuate potentially out-dated ideas about what career progression might look like? 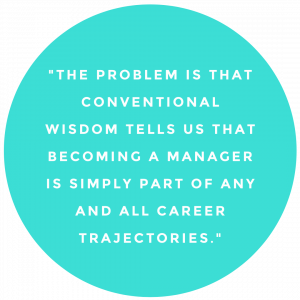 From those awkward school careers evenings to work-based television dramas, we’re conditioned to aspire to seniority at work. Promotion to management – and thence to leadership – is the accepted and expected trajectory of anyone with serious career ambition.

Yet, the simple fact is that not everyone has the natural ability, nor the desire, to manage. This is something most of us probably understand because most of us have been managed by someone who proves that rule…

It’s important to recognise that the difficulty some people have in managing others is not down to professional ineptitude. Quite the opposite. It is more likely that their talent and ability within their former role led to a promotion – though perhaps with little thought about what management (as an isolated set of skills) entails.

These skills, however, can be developed. Management training is available in-house within many organisations or through businesses like ourselves – for those who do desire to become people managers.

WHAT MAKES A GOOD MANAGER?

The problem is that conventional wisdom tells us – wrongly – that becoming a manager is simply part of any and all career trajectories. And it really doesn’t have to be…

Whilst conventional career paths are still alive and well, modern businesses offer a wide range of opportunities without having to manage colleagues.

These may include taking advantage of training and development opportunities that allow the employee to specialise or expand their knowledge. From here, initial roles can grow, evolve or adapt to suit the needs of the organisation and capitalise on the employee’s enhanced skillset or specialism.

Other possibilities include training and mentoring other members of a team, rather than managing them; building a reputation for innovation and creative process, with which the individual can become involved in strategy; or building upon relationships with suppliers and/or customers to incorporate business development in their role – and more besides.

According to research conducted by the European data agency, Eurostat, Britons now work among the longest hours of any nation on the continent – on average more than 42 hours a week.

With such a high proportion of time spent in the workplace, there is a growing (and much needed) focus on employee wellbeing. This should be a given at the best of times, but is even more relevant in light of the pandemic and the effect of lockdown on our mental health.

It’s vital that the wellbeing of all staff is well supported in the workplace – and that responsibility falls upon the managers/leaders of today and tomorrow. 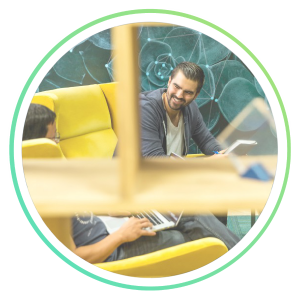 Emotional intelligence (EQ) is essential when building strong connections, managing tricky scenarios, and persuading others. In other words, the most vital ingredient for thriving as a manager and for building a positive team culture that supports employee wellbeing and mental health.

WHAT IS EQ AND WHY IS IT IMPORTANT?

Broadly speaking, emotional intelligence is the ability to understand and manage your own emotions, and those of the people around you.

If you have high emotional intelligence, it’s likely you’ll be aware of your own feelings, how you respond to those emotions and the effect they have on the people around you.

Emotional intelligence is essential for success in leadership because it allows you to filter your own emotions in a way that allows those who look to you for direction to perform as effectively – and as happily – as possible.

HOW TO OPTOMISE YOUR FUTURE LEADERSHIP MODEL

The interview question that starts this article is also good place to end it, because the interview is where you can create the building blocks for resilient, happy, and emotionally intelligent leadership in the future.

Instead of being concerned with ambition, interview questions should incorporate a line of questioning about emotional intelligence as well as how comfortable and confident a candidate feels managing people.

These questions might include something along the lines of the following:

By understanding the qualities required for people to lead effectively, you can take steps to recruit/promote efficiently and to put in place processes that ensure those who don’t want to manage are still able to progress and those that do are fully equipped to do so.

At Luminate, we offer a range of workshops to suit leaders, managers, and employees, covering emotional intelligence, building strong teams, mental health awareness training for managers, as well as our Leadership Wellbeing series.

If you’d like to find out more about how we can help you shape the leaders of today and tomorrow, please get in touch for an informal chat.